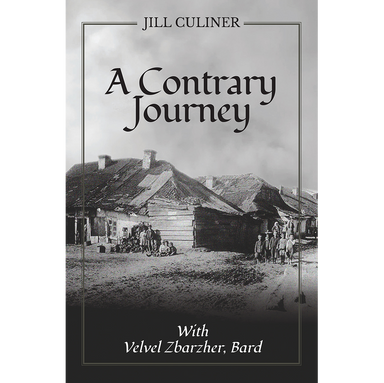 The Old Country, how did it smell? Sound? Was village life as cosy as popular myth would have us believe? Was there really a strong sense of community? Perhaps it was another place altogether.

In nineteenth-century Eastern Europe, Jewish life was ruled by Hasidic rebbes or the traditional Mitnagdim, and religious law dictated every aspect of daily life. Secular books were forbidden; independent thinkers were threatened with moral rebuke, magical retribution, and expulsion. But the Maskilim, proponents of the Haskalah or Jewish Enlightenment, were determined to create a modernJew, to found schools where children could learn science, geography, languages, and history.

Velvel Zbarzher, rebel and glittering star of fusty inns, spent his life singing his poems to a loyal audience of poor workers and craftsmen, and his attacks condemning the religious stronghold resulted in banishment and itinerancy. By the time Velvel died in Constantinople in 1883, the Haskalah had triumphed and the modern Jew had been created. But modernization and assimilation hadn’t brought an end to anti-Semitism.

Armed with a useless nineteenth-century map, a warm lumpy coat, and a healthy dose of curiosity Jill Culiner trudged through the snow in former Galicia, the Russian Pale, and Romania searching for Velvel, the houses where he lived, and the bars where he sang. But she was also on the lookout for a vanished way of life in Austria, Turkey, and Canada.

How places and sounds have vanished, taken uniqueness with them. I’ve seen it happen. As a social critical artist and teller of tales in modest settings—front rooms, back kitchens, open fields, public halls, and many low bars—I’ve always chosen itinerancy over comfort and security. I’ve been shifting across the earth’s surface for well over half a century now and doing it on the cheap: no soulless or chic hotels, no tourist venues for me. Just sleeping in open fields, or cars, or crumbling castles, or down-at-heel inns; crossing much of Europe on foot; lurking in unsavoury places; tasting life in French, German, English, Hungarian, Lithuanian, Polish, Greek and Turkish villages.

Those spoon players, the fine moustachioed men, the singers with their high-pitched tones, and the hurdy-gurdies have all vanished. Lakes are churned by speeding boats. European towns are bland and tidy, housing developments have spread like relentless fungi, and traditional musicians have been humiliated out by youths screaming, ‘Get modern.’

Today’s cultural references demand a break with the past, and little has survived the onslaught of commercial noise, mass entertainment, bling, cement, and polyvinyl chloride. Reason and observation have been replaced by canned laughter, binge-watching, must-have products, and the star or victim of the moment. Gone are sounds, smells, and feelings. In their place are ‘historical’ reconstructions, touchy-feely interactive museums, atmosphere candles, world music, sound and light shows—all as authentic as any Disney creation. We didn’t value what we had, we didn’t cherish or preserve it, and we’ll never get it back, despite designer determination.