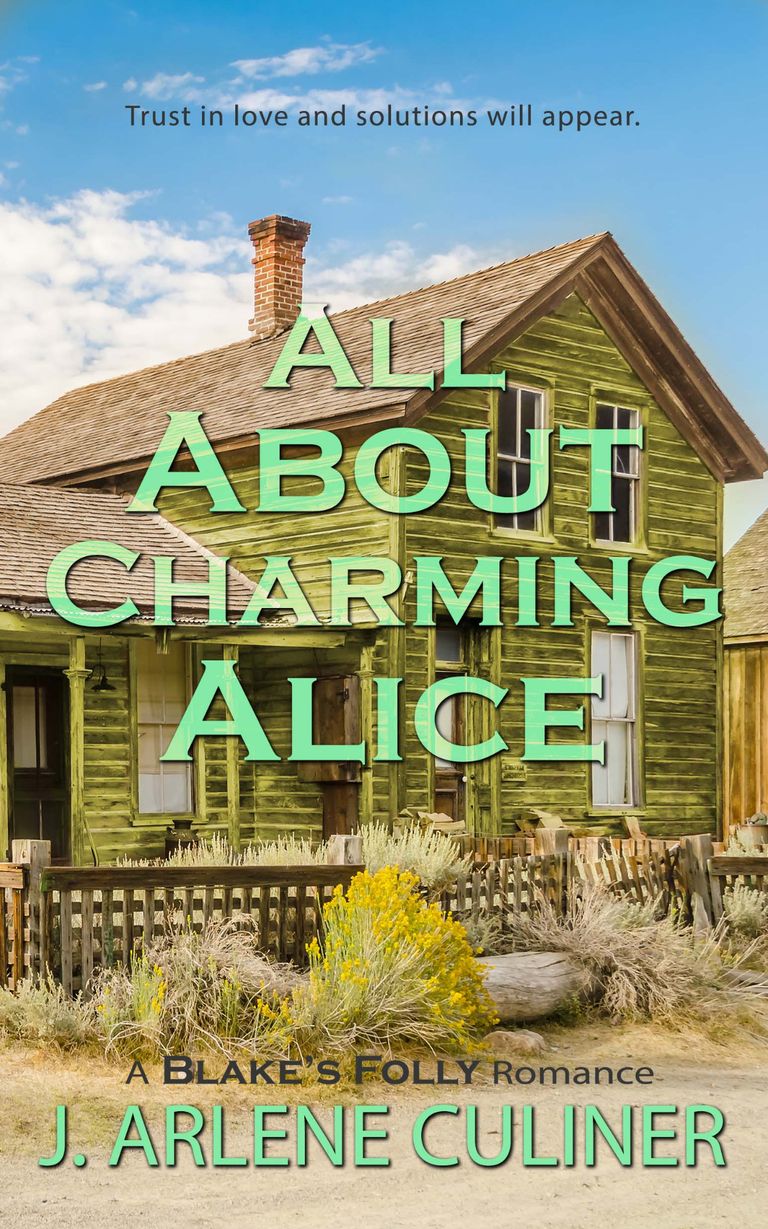 Alice Treemont has given up hope of meeting the right man and falling in love. Living in depopulated Blake’s Folly, a quirky community of rusting cars, old trailers, clapboard shacks, and thirsty weeds, she spends her time cooking vegetarian meals, rescuing unwanted dogs, and protecting the most unloved creatures on earth: snakes. What man would share those interests? Certainly not Jace Constant whose life in Chicago includes elegant women, fine dining, and contemporary art.

Jace has come to Nevada to research the new book he’s writing, but he won’t be staying; as far as he’s concerned, Blake’s Folly is hell on earth. He’s disgusted by the desert dust on his fine Italian shoes, the dog hair on his cashmere sweaters, and by the desert’s bleakness. As for snakes, he doesn’t only despise them: they terrify him.

So how is it possible that each time Alice and Jace are together, even the air starts shimmering? That she’s as fascinated by him as he is by her? That their feelings go deeper than raw desire? Nonetheless, it looks like this relationship is doomed before it starts: Jace won’t be around for long, and Alice wants to avoid the heartbreak of a short fling.

In need of some juicy romantic gossip, all the other 51 residents of Blake's Folly have decided Alice has been alone for long enough. The attraction between her and Jace is obvious to everyone, so why worry about essential differences? If you trust in love, solutions do appear. But won’t the solutions call for too much self-sacrifice, too many compromises?

All About Charming Alice
Published by Fire Star Press

Excerpt
Jace rose to his feet and, in that languid way of his, crossed to the doorway where she stood. Alice was a tallish woman but, still, he towered over her. Casually, stretching out one arm, he rested his hand on the doorframe, just a hair’s breadth above her head. He was close, so close. His body was supple, strong, and—yes, she had to admit it—warm, fragrant. The heat of him reached her over the few inches separating them and she ached to curve into it. Aura? This man was a flesh-and-blood heat-wave.
The strange, tingling excitation was flowing through her again like thick port wine. She lowered her eyes, refusing to meet his gaze, although she knew he was, once again, examining her minutely.
“And I want to take the room.”
“Look, you don’t need my room,” she said, desperation evident in her tone. “There’s a perfectly reasonable motel the other side of the Winterback Mine, out in the direction of Logan. Actually, it’s far better equipped to take in tourists than anything you’d find here in Blake’s Folly.”
“I know. Rider Motel. Air conditioning, closed-circuit television.” His smile was wry. “That’s exactly where I’ve been staying for the last three nights. And over and over again during those three nights, I remembered Blake’s Folly and the ‘room to let’ sign on your wall. And the more I thought about it, the more appealing it got.” He paused, let his eyes wander over the faded wooden framing, over the settee on the veranda. “Right here, it feels more like home.”
That wasn’t it, she knew. That wasn’t even part of the truth. He was back because something hot and wonderful shimmered between them. Did she fascinate him as much as he did her? Possibly. Although she hadn’t done anything to encourage him, not even once. It would have been hard to find anyone less friendly than she’d been.
Still, there was something about him that touched her, something that had nothing to do with raw desire. Was it the warmth in his eyes? A quirk to his lips that promised humor and understanding? Or was it just plain magic, the magic that happens when the right female meets the right male.

What people are saying about All About Charming Alice

This book definitely falls into my "feel-good romance" category!  Loved the story, the characters, the setting...  a great choice for those of us in the "older" population who would like to sit down and enjoy a mature romance with mature characters. Excellent book... just my style... highly recommend!! Chattykat

I loved this novel and Culiner's writing is magnificent. The reader is pulled into the thoughts and ideas of the characters immediately through very strong and deliberate dialogue and does not let us go until the perfect ending.
Sheila Clapkin, Author

Gosh, I enjoyed reading this book immensely. The humor during Jace's courtship of Alice and of her self doubts often had me laughing out loud. Blake's Folly residents all 53 of them are enough to make up one of my crazy family plus in-laws.
Lisa McCombs, Readers' Favorite

All About Charming Alice:  BOOK TRAILER